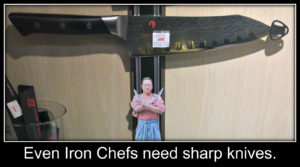 It’s November, which means that most of us are preparing for that calorie-filled, family invasion known as Thanksgiving.  Most people will do some sort of carving the turkey at the table, but even those of us who prefer to serve prime rib or ham or even Tofurkey all have one thing in common, we need a sharp knife.  It seems counterintuitive, but a very sharp knife is less dangerous than a dull knife. A sharp knife needs less force and fewer cuts to accomplish the job.  It also promotes better cutting techniques which leave you less likely to have a knife slip.  Also if you do cut yourself a sharp knife will leave a cleaner cut which is easier to deal with than the more jagged cuts from a dull knife.  All in all, just remember that no matter what you are cutting it is a good idea to make sure your knife is sharp before you start.  We sell a variety of knife sharpeners from the traditional sharpener that looks like a long metal pole to sharpening stones, which are usually used on more industrial blades, but are excellent if you know what you are doing.  For those of us who do tend to need a few band-aids every time we try to sharpen a knife we also offer in-house knife sharpening services.  Just remember that November is a busy month, so if you need us to sharpen up your thanksgiving arsenal, bring them in early.