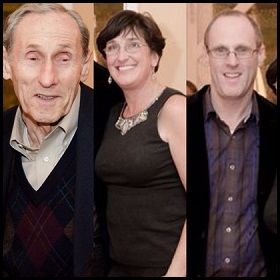 Standard 5&10 Ace in San Francisco is proud to celebrate their 75th year in business this year, and 65 years serving their customers in Laurel Village. 75th Anniversary observances will take place throughout May, starting with a huge anniversary celebration May 9-11 to thank San Francisco for shopping locally at this landmark Laurel Village variety store.

SAN FRANCISCO – April 28, 2014 — In Laurel Village, San Francisco, stands an old-fashioned variety store, still bearing the name STANDARD 5&10 and still providing unmatched customer service to San Francisco residents. The story behind the store’s 75 years of success reads from a page of American history; young immigrant begins his career at the bottom of the hierarchy, and works his way to the top of the company, with his son following in his proud Father’s footsteps.

The first Standard Store opened in 1939 on Geary at 19th Avenue in San Francisco.

In 1946, GUENTHER LEOPOLD arrived in the United States, and took a position as stock clerk at the 5&10¢ Store the next year, at 50¢ an hour. As a teenager, not only was this a fine salary, but Guenther felt fortunate to have a job.

The next several years brought prosperity and growth to the five-and-dime store, and Guenther assisted in opening the new Standard Stores at Laurel Village and on the Tiburon Boardwalk. After graduating from SF’s George Washington High School, Guenther put himself through college while gaining additional experience at the stores, and earned his business degree in 1954 from Golden Gate University. Guenther’s employer, Simon Kapstein, later turned the management of the store to his son, Bob Kerner.

In 1988, Guenther’s son JEFF LEOPOLD decided to join his father’s business after his graduation from UCLA, and worked with Bob and his father for three years before becoming partner with his father in 1991. Jeff brought a youthful energy and outlook to the business, focusing on both automation and management structure. The store is truly a mom & pop store these days, owned and operated by Jeff and wife Michelle Leopold. “Mom” Michelle is responsible for the marketing and charitable contributions for the Mom & Pop operation. Grandpa Guenther still loves coming to work several days a week in his semi-retirement.

Jeff attributes the continued success of the 75-year business to the store’s theory that the customer is the star of the show; Jeff and Guenther are often seen on the floor in Laurel Village helping a valued customer find the precise knicknack needed for a project, and every employee is mindful of Ace’s customer service motto “helping you is the most important thing we have to do today.” The store recently underwent Ace Hardware’s Helpful 101 Certification process, and Standard 5&10 Ace received a 97.2% helpful score by 210 customers (passing score is 80% with 100 customers minimum surveyed).

The California Street store is the only Standard Store remaining today, but the five-and-dime is alive and well in Laurel Village. The store boasts a loyal customer base; many regular shoppers visited the 5&10 as children, and now bring their own children to the store! The store’s employees are the key to the 75 years of successful customer satisfaction; most have been with the 5&10 for over 5 or 10 years.

Recently, the mom & pop operation expanded over the Golden Gate Bridge with the opening of Marin Ace Hardware in December 2011. At the San Rafael location, as with the San Francisco store, the store prides itself on a great selection of merchandise at competitive prices, with outstanding customer service. “We don’t carry Hallmark cards, underwear, or notions at Marin Ace,” explained Jeff, “but our customers say that the Marin store also carries almost everything you need – at least in hardware – as our SF store, along with the unmatched customer service that Ace Hardware is known for.”

To celebrate 75 years in San Francisco and to thank their customers for their continued patronage since 1939, Standard 5&10 Ace will hold 75th Anniversary celebrations and sales throughout the month of May: